Check out our free KIDS CLUB

STUCK HOME? Sign-up free in order to add your art, comments and more!

Updated constantly with comics- activities – coloring pages – and more!
(Because of the huge demand, we have removed the secret code!)

is now available for sale!
Don’t miss this adventure filled universe of super powers, sci-fi delights, and a touch of magical fluff as the UFO has to battle a deadly ‘house squid’ rage-out! Created and produced by Christopher Tamulevich.

this is the companion to our first issue featuring the black and white art of issue one. No colors or letters, until YOU add them!

This is the official web site of Hero Shack. What exactly IS Hero Shack? Hero Shack is a comic world created by a guy who grew up loving comics, and decided it was time to start making them. The details on him can be found HERE, but the point of THIS page is promoting HEROES.

The world has been dealing with an consistent rise of super natural events over the last two decades, and matters are getting serious. People are terrified, never knowing what to expect next, as anyone, anywhere, could suddenly ‘rage-out’ at a moments notice wielding strange and often devastating forces no one could predict.

Still, not all who find themselves wielding forces ‘rage-out’. In the last decade, heroes have risen to combat the wickedness of villains who have come to exploit the world in in pervasive ways. Of course, deciding who’s who is a matter of perspective and opinion. 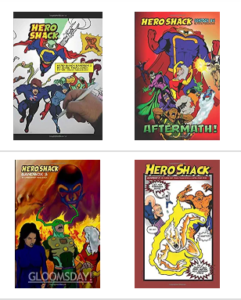